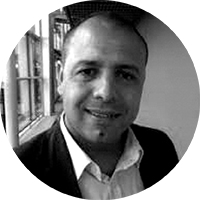 Pr. Abdesslem Djerdir received the degree of engineer in electrical engineering from the National Institute of Electrotechnics of Bejaïa, Algeria, in 1993 and the PhD degree in electrical engineering from the University of Franche Comté Belfort, France, in 1999. He is currently a lecturer at the University of Technology of Belfort-Montbéliard (UTBM), France. He has been accredited to direct scientific research since december 2007. His research areas include modelling and design of electric and fuel cell vehicle systems (electrical machines, energy storage devices, and power converters). His main research activities focus on the availability and high efficiency of electric power trains for transport applications by combining experimental and theoretical approaches. In this context, he was the vehicle referent of the European Mobypost project (http://mobypost-project.eu) where 10 fuel vehicles were built and tested. Since December 2014, he is the director of the Energy Department at UTBM.